The Real World can suck at times. Being stuck in a warehouse 10 hours a day can wear on a person’s morale very quickly. In my spare time, I experiment with different hobbies to cure myself of boredom and remind myself that I’m person, not just a cog in a machine. Even in the time, I didn’t feel like doing anything constructive, I felt compelled to do something. I felt like I always needed to do something to occupy my time.

During college, one of the ways I spent my time off was by raising a small tank of fish. The fish gave me some healthy responsibility and company as I was going through my freshman year. Later when I moved to my second dorm in the second year my mom dared me to try my hand at raising plants in my dorm as well. Although my new dorm room was the size of a broom closet, it had access to a lot of natural sunlight. The plants became another good distraction for me. It was rewarding to see my plants mature and develop right before my eyes.

After college, it took me a long while before I could finally land a job. In the meantime, my Mom dared me into another hobby. While I was away at WKU, my family got invested in running. My mom, dad sisters, and several of our close friends were in on it. So it was only a matter of time before I became absorbed in it as well. After some coaching and proper gear, I came to enjoy the sport as a way to being healthier and a way to connect with others.

The unique thing, I feel, about running is that you run as an individual, yet you are also part of a community event and connect with fellow runners to encourage to do our best. I got this feeling while I was running in a thirteen-mile marathon through the city of Louisville.

Early Saturday morning, I was running and making good progress. Out of the thousands of runners that surrounded me, I had no idea who was in front of me or behind. My head was in its usual trance while I pace, listening my favorite songs on my phone. My head was so far in the clouds that I didn’t notice the road construction around the 5-mile marker.

I tripped on a piece of loose concrete from the construction in the area and I went down, hard. And there I was, on the ground with two scraped knees. Before the first drop of blood could leave my knees, several of the runners behind me stopped dead in their tracks to help me up and ask if I was OK. After I was to my feet and dusted down, I assured everyone that saw my fall that I was OK. The wounds to the knees didn’t make resuming the race easy.

At first I could only limp along, nursing my new handicaps. The thought of quitting right then and there had cross my mind. But something urged me to keep going. Maybe it was my own determination to finish what I have started? Maybe it was the synergy of competition that surrounded me that forced me to go on? Maybe it was both? Whatever the case, it worked and eventually I was able to bring myself back up to steam and finish the race in two hours and fifteen minutes!

When I race, I run for myself and my own reasons. Your goals are your own. Your strength is your own. Your ambition is your own. And the only time you fail is when you decide that it was not good enough. It is a perfect sport in which anyone can participate, nobody can feel alone, and feel awesome that you have accomplished something worthwhile. 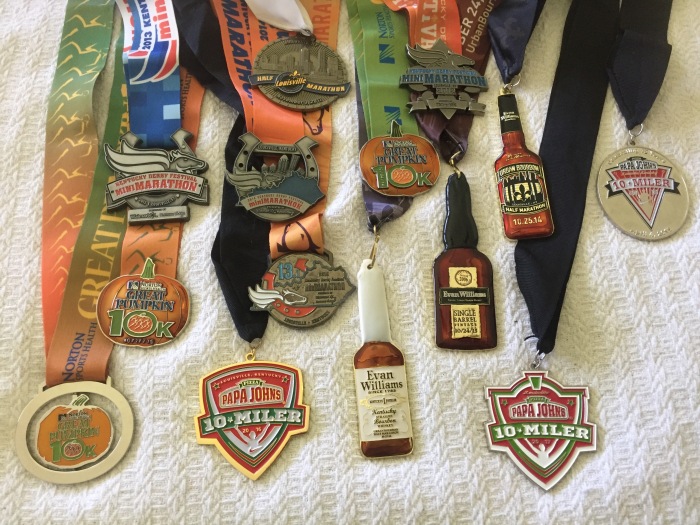 Here are some of the metals I have collected over the years while running.