I woke up this morning stiff and tired from the long day of travel the day before. But both my crew and I had to put that aside, for today was the last day of construction for us before we had to go home on Sunday.

Construction on Catherine’s house has come a surprising long way despite our absence. When we left it on Wednesday afternoon, the back wall was almost level with the other building’s wall next to Catherine’s and the front wall was just short of the halfway point. The freelance engineers were already going to use part of the brother’s house as the left wall, so that was already covered but the right-hand was yet to be started. When we came back that morning, the back wall was finished and was being fitted with an electrical outlet. The front wall was now halfway up and the foundation for the right wall has been laid down.

We resumed our usual positions and got immediately to work. Our time was short but productive. When it became time to clean the tools, we managed to bring up the front wall three levels of blocks, just enough to see where the window was going to be. And the right wall was up to knee level. 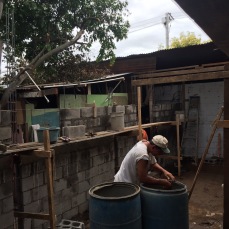 Before leaving, there was one last thing to do before saying goodbye, a house blessing ceremony. Although the house was not ready to move into yet, we still wanted to wish Catherine and her children good blessings in their new home. Just like in the Belize ceremony, we offered a few gifts to bless the occasion and help out the family one last time. The gifts included sacks of rice, beans, and cooking oil for provisions; a picture frame with a group photo of everyone involved in the project; a photo album of everyone working to build the house; a prayer crystal that embodies all of our love and blessings for Catherine’s family; and I provided a sturdy tote bag for groceries and a Kentucky horseshoe, a symbol of luck and our home to bless their new home.

We spent the remainder of the time on the work-site hugging, crying, and taking as many photographs as possible before leaving for good. I still felt bad leaving such important work half-finished, but our organizers assured us that the house would be complete in one to two weeks. I looked forward to that day.

Tiredly, we headed home for the day. The rest of the day was occupied with lounging, card games, and hosting a pool party with the HHM-sponsored schoolchildren from the youth center. Once again spending some quality time with the future prospects of Managua. Although I still lacked the language, I spent some time with the little ones in the pool playing ball or wading on inner tubes. The kids all had a good time, and so did we.

(Catherine with her two children, Jose and Kelvin)