Thursday came as a free day for our crew. Today Javier and his crew were left alone with Catherine and her family to work on the house while we went exploring into the deeper regions of Nicaragua.

As soon as we were ready, we set off for San Juan de Oriente, a countryside village in deep Nicaragua. The trip was long and bumpy; the village was about 25 miles from the outskirts of Managua with ill-maintained roads to lead the way. I didn’t mind so much. The smell of the clean, fresh air and beautiful green landscape was enough made my trip relaxing. Along the way we began to see lots of farmhouses. Some had goats mowing the grass, and some had chickens that looked like they wanted to cross the road. As we were getting closer, we started to see more family business shops, most of which turned out to be furniture stores and pottery shops.

When we finally arrived in town, we stopped in front of a potter’s shop with which HHM usually does business. Like all the other shops in San Juan de Oriete, the shop is privately owned and family managed. The proprietor took my group back into his shop and began explaining how he creates his clay crafts.

After our lesson on the effort that goes into each pot, we were given the opportunity to buy from the vast selection of colorful clay art. There were simple clay pots with elaborate designs of fish, birds, lizards, or butterflies in bright earthy colors. There were small cups with decorative borders. There were blowfish pots for incense, sea-turtle flutes, and clay lanterns. I had to temper my enthusiasm with caution when making my selection. So as to (1) not to break anything in the shop and (2) ensure that it could survive the trip through airport security and the ensuing flight. 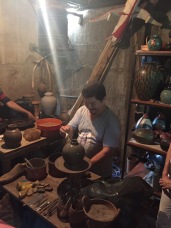 It was times like this when I wished I had a bottomless inventory pocket like you would find in a “point-and-click” adventure game, the kind where you can store any amount of absurd knickknacks within a coat pocket without fear of being destroyed by an outside force. We gathered and wrapped our new fragile belongings and begun to make our way to our next destination: Mombacno.

Mombacno’s attraction of was its high-ropes zip-lining course, a physical sport that I have had no practice in. If I had, I would have known beforehand how terrifying it was to be 50 feet in the air, walking on a rope bridge from one zip-line platform to another, and have the possibility of being stranded mid-flight 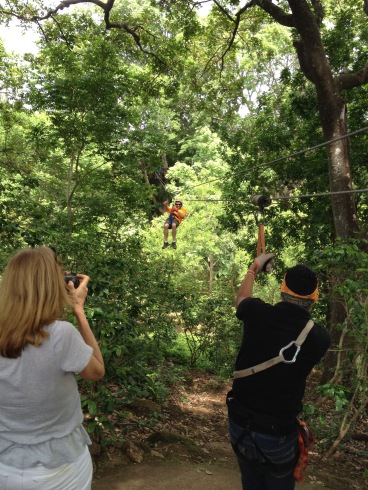 if I applied the brake for my line too soon! Well, despite all of my fearful gripes I could make about my experience, I still had a good time. It was almost liberating to be able to fly through the trees at soaring speeds that I could only experience in a dream.

It was nearing lunch time when the last person in our group rocketed down the last leg of the zip-lining course. We crowded back into the bus and set off for Granada, a bustling metropolis off the coast of Nicaragua Lake. For our first stop in Granada, was lunch. Our leader chose a serene café for its relaxing, open-aired garden and for its tasty lunch specials. This town also proved very accommodating to tourists. Despite that, it seemed like every corner had a vendor trying to pawn off something to an unsuspecting passerby. We did stop for some locally made goods, but not with the street merchants. Our last stop in Granada was the market place, where a multitude of sellers gathered to sell their finest wares. Some sold clothing; others, mugs, wood sculptures, knifes, hammocks, ships in a bottle and other things you would come to expect from a tourist market. It was here I chose to buy a communal present for my family. The other members of my group had similar interests in mind.

The day was not over yet. We still had one more stop to make before going home for the day: Masaya, the home of Nicaragua’s Masaya Volcano. For the next hour we traveled through green valleys and on dirt roads. The area surrounding the volcano has remained barren of human encroachment or attraction, and the closer we got to its epicenter, the fewer trees and greenery we saw. Never had I seen a place so vast and so empty.

At last we came to the volcano’s open mouth. Although the volcano has stopped gushing forth lava years ago, it was hard at work billowing white clouds of sulfur dioxide like a factory chimney. The discharge also made the air a little hard to breathe. The only signs of any human influence on this place were the volcano’s warning signs for tourists, the stone remains of a small building, a large metal cross placed high above the smoky crater, and a dirt walk path that leads up and around the opening’s edge.

After some pictures in front of the opening, we started to take the dare and walk around the edge of the volcano to get a bird’s eye view and maybe even see any lava remained in this volcano. The dirt trek didn’t sound so bad at first. As a Boy Scout, I have been on rough hiking trails before with 50 pounds of gear strapped to my back. And as a runner, I have been in races that have uphill courses. So this should be easy! Eh, not so much. The further we went, the more treacherous the trail became. The ground got softer with loose gravel and soot. The path got steeper with 45 degree angle climbs. And the air got thinner and thinner as we climbed. By the time we reached the top, the sun had begun its descent behind the other side of the volcano. It was a beautiful sight to behold. Our missionary group, on top of the world, over an active volcano, and witnessing a sunset that you cannot find anywhere else. 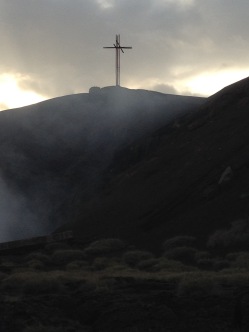