After each day at the work site, our crew and Javier’s crew reconvenes at the HHM youth center for lunch before continuing with the rest of our day. Today was little different. We still had lunch at the usual place, but this time we had some company, the children of the youth center. Today was our day to play and interact with some of the local kids that HHM helps on a daily basis.

The festivities started with the kids reading their favorite books to us. Some chose simple picture books that had more cartoon illustrations than words while others showcased their fascination for bugs by reading the contents of an encyclopedia. Through it all, I had a nagging sense of guilt for not knowing how to talk to the little ones. Although I had two years of Spanish under my belt from high school, none of it helped me in this time and place. My little one was reading to me a story about Princess Rosa and that was the only part of her book I understood. I tried to follow along as best I could, but only recognized bits and pieces of the words and I only followed what little I could make out from the few pictures the book had. From my time in Belize, the local’s English/Spanish dependence ratio was about 50/50, and I figured it would be the same here. I was wrong. Dead wrong.

I had time. I could have dug out my old Spanish books. I could have downloaded a learning app on my phone. But I didn’t. And know I will never know what happened to Princess Rosa nor truly appreciate this little girl’s story-telling skills.

After a while we moved on to a different activity, finger-painting. This was an activity I could help with my limited local vocabulary. The kids had their choice of rojo, azul, or amarillo (red, blue, or yellow) to be painted on their hands to make hand-print butterflies and tree leaves as is or they could squish their hands together to make verde, anaranjado, or morado (green, orange, or purple) for their creations.

The last activity for the day (after clean-up, of course) was bubble chasing! A common question that pops up every time I’m on a mission trip that involves a children center is whether or not we could bring the kids something fun to play with. I don’t mean start up a multi-thousand-dollar toy drive, just a few inexpensive gifts (cars, dolls, puzzles, etc.) to show how much we want to be there and how much we care. HHM’s only recommendations were bubble wands and candy, which puzzled me. Even if money or the number of kids weren’t an issue, surely these children would want to play with other kinds of communal toys, like marbles, chalk, plush animals, or wood blocks? As a kid, the cheapest toys I played with were much more intricate than soap and water, and I’m sure lots of other people’s toys were, too.

Such doubts left my mind as soon as a reached for the first wand. I was swarmed with 7-10-year-olds wanting me to either drop the wand or initiate the first wave of sky born suds. They finally settled down somewhat when other members of my crew started blowing bubbles in the more open areas of the center. The children jumped and cheered as they raced to catch as many bubbles as they could before they float to the ground.

These kids didn’t need expensive video games, the latest cellphone, or the most popular toy on the market. They were content with running crazy with their friends and chasing bubbles. Another lesson from Nicaragua. 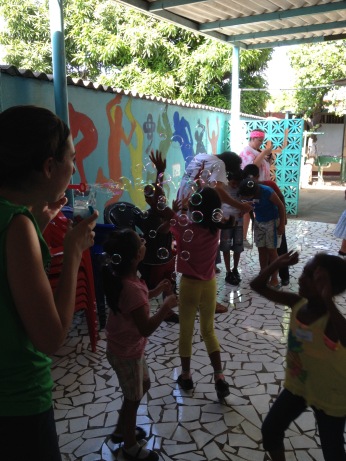 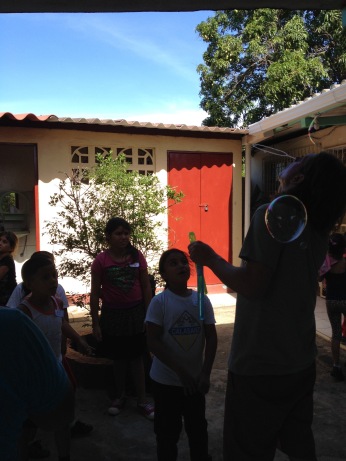