Conventional wisdom among vacationers is to always pack their ugliest clothing for the trip. The reason being? If their baggage was ever lost, no big deal. A better reason being is so they can ditch the old clothes to make room in their travel case for more foreign souvenirs. It sounds wasteful, but trading some old socks for some once-in-a-lifetime keepsakes sounds like a good trade to me. That is until this trip.

In preparation for this trip I have been searching various salvage stores for cheap easy-breathing shirts that I could leave behind in Nicaragua and maybe donate to a local clothes drive. However, during the trip’s orientation, my group was told that any clothing (and any other personal property) that I bring into the country I had to take back out of the country. At the time I didn’t understand why till I watched a certain movie on Tuesday evening.

The movie was called Poverty Cure, a series of videos that depict the different nuts and bolts of poverty and what kind of help is needed for each instance. The episode we watched had to do with charity that provides more harm than good. Up till now, I had assumed that any organization that aided the underprivileged was a good organization regardless of name or origin. Never did I realize that a free handout of goods could cause a foreign addiction.

Let’s say, for example, an American organization donates a thousand shirts to a community in Nicaragua. This is a noble gesture, of course. However, this donation in turn eliminates the need for Nicaragua to plant their own cotton crops and make their own shirts and kills the local small market in textiles. They become dependent on a foreign resource and they become addicted to your wallet, which does nothing to help anyone. Instead of healing a wound, you only put a Band-Aid on a broken arm. As it was said in the movie, “A nation cannot rise out of poverty by relying of a foreign resource.”

After watching this video, I have come to understand why the coordinators did not wish us to abandon our own resources for the locals to find. He did not want the locals to become addicted to an income that MIGHT come and he did not want the locals to start calling dibs on our discarded underpants! I have also become warier of which organizations I choose to devote my time and money to. Am I making a long-term resolution or a short-term solution? Will what I do give a man a fish or teach a man how to fish?

Tuesday morning, before getting started with our job at the house site, our coordinator decided to take a short stop at Adrián Rojas Narvaez, a small public school for elementary school students. Though the school itself was small, it’s class size was not. Close to 500 students eagerly come to class here, and they are shared with only ten teachers. Yet despite the complete imbalance of power here, the children come to learn and know what an honor it is to be to come to school each day.

Our visit was met with excitement and enthusiasm. The children greeted us with classroom carols and hugs. They were so excited to be able to meet with American foreigners from another land and greeted us enthusiastically. All too soon we had to say our goodbyes and head back to the work site and add just a little bit more to the house, and bringing it one step closer to being done before we have to leave.

We came, we worked, we left. In a nutshell, this is how our work day goes for the week. We come, we mix more cement, we stack more blocks, we weave more rebar, and the walls get a little higher. I really can’t add much more than that. It’s a slow-moving process. Just like any stone artist would tell you, we can only reach our goal by chipping away at it one piece at a time.

After work, we were given a tour of downtown Managua and get a brief glimpse of Nicaragua’s history, culture, and recreation centers. Some of the places we visited included the Sandino Museum, a memorial site that illustrates the rebellion between the repressed citizens of Nicaragua and their rich oligarchs; the Botanical Gardens that house every known tree in Nicaragua; Revolution Square, a large plaza that has been the site of several iconic historical events in Nicaragua and the resting site of the Old Cathedral that survived the earthquake of 1972; the Managua Mini City, a scale replica of what downtown used to look like before the earthquake of 1972; and finally, the city’s sports park, the very modern and very clean recreation park for the public that features playing field for nearly every sport imaginable.

If time were not an issue, I would have loved to take the tour of each museum and art gallery. Although we weren’t able to take the grand tour of each site, it was still wondrous to see so many of Managua’s iconic places at one time. 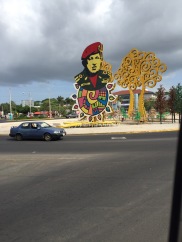 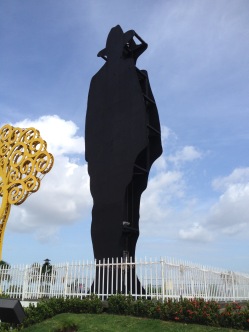