♪ There’s so much that we need to share ♫

♫ So send a smile and show you care ♪

These were the lyrics I woke to one day in early June 2015. A pleasant tune to hear on the radio first thing in the morning. Nice enough to stir me from a restless night’s sleep and motivate me to my feet. Not to mention fitting, given the awesome task that awaits me that day. This would be no ordinary Sunday morning. This song would be the start of another adventure with HHM. This time to Managua, capital of Nicaragua.

Just like my last adventure in Belize, the air traffic commute turned out to be the most stressful part of the trip. If you weren’t crammed into the smallest jet they could find surrounded by complete strangers with no elbow/leg room, you had less than 20 minutes to board your connecting flight, watch your stewardess fly down the isle via turbulence, and worry if your fragile vase you bought at Managua’s pottery village is going to survive the trip. However, against all odds, my new crew and I made it safe and sound in Nicaragua’s airport.

It was dark when we arrived. Dark and humid. There was much I wanted to do and see when we arrived, but that had to wait. The head coordinator of our project, Ed, met us at the airport with a bus ready to take us to our new home, Casa Nica. On the way there, Ed began his orientation of what exactly we will be doing during our stay.

Ed began to explain that the house we will build is for a single mother, Catherine, and her two children, José and Kelvin (ages 10 and 11). Catherine’s brother has recently built a home for his family behind their parents’ house. This, in turn, displaces Catherine with no place to sleep but a well-worn couch in the alleyway between the brother’s house and their neighbor’s house. Yes, you read that right: outside! On a coach that a dog wouldn’t sleep on! The alleyway did have roof and a door for protection, but no room or privacy for Catherine or her kids.

Unlike the Belize project, the new house will be built out concrete blocks and mortar instead of wood and nail. There is a small lot behind the brother’s house surrounded on all sides by other buildings. The only way in or out is through the alleyway Catherine has been sleeping in. This also meant that construction would be slow moving and without any real goals for accomplishment. Our role, Ed described, in this construction project not to finish the house, but to help ease Javier, the project coordinator, and his freelance construction company’s burden. The house will be finished with or without our help; the money we spent on this mission trip has already paid the construct crew’s commission. Our job is only to help speed up the progress as much as possible.

Meanwhile the bus ride to new home was quite colorful. Out the windows, we saw lights displaying private contractors, new products, election campaigns, and stores like that of a modern town back home. I was not sure what level of poverty I was expecting from Nicaragua, but I was sure I was not expecting advertisements of industry and commercial restaurants like Pizza Hut and burger joints. Clearly, Nicaragua has its problems, but it was industrializing and may even outgrow the need for Hand in Hand Ministries.

At last we arrived. Casa Nica, our home for the week: An enormous house, a spacious yard filled with healthy green grass and fruit trees, and a private pool. Casa Nica was once the property of a high-ranking politician and was built in a residential area. No sooner than we walked through the door than we all shuffled wearily to our beds after the long day of traveling and anticipating a longer day of work tomorrow. 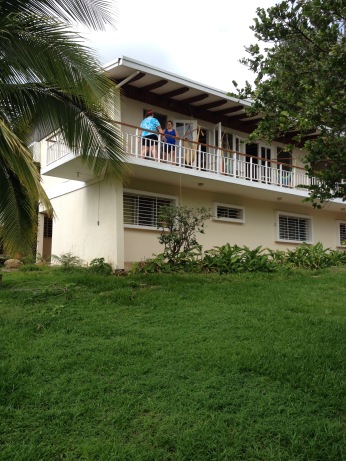